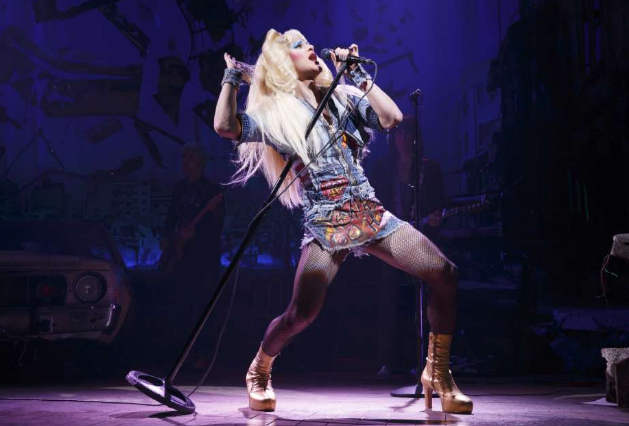 "SHN's 'Hedwig' Either Excellent or Transcendent"

Let’s be clear: Darren Criss is superb in the title role of SHN’s “Hedwig and the Angry Inch” at the Golden Gate Theatre.

Pumping out the show’s glam and punk rock anthems, he works his mike stand at times as if it were his own appendage, at others as if it were a sexual partner. His miniskirt highlights his every sinew — his leg muscles practically have their own leg muscles, and his bulging veins are visible from many rows back.

Yet his strength isn’t just physical. When the guitar in the four-person band that is the Angry Inch blasts out power chords at the command of his outstretched arm, it’s a product not just of bodily power but also of messianic deviance and contagious rage.

Hedwig has a lot to be angry about: a bungled sex change operation that left her, en route from Hansel to Hedwig, with the “angry inch” of the show’s title; a brutal breakup with the soldier she had that operation for and moved from East Berlin to Kansas for; and a second, even more cruel breakup, this one with a teenage boy who steals her musical ideas, becomes famous and never credits or remembers her, even though she gave him his rock-star name, Tommy Gnosis.

As Hedwig plays her show for us, Tommy’s AT&T Park concert (John Cameron Mitchell’s script allows room for many nods to the Bay Area) takes place simultaneously offstage. Each time an upstage door gets opened — usually by Yitzhak (Lena Hall), Hedwig’s slavish but vindictive sidekick — the lights and sound from Tommy’s much bigger show overwhelm Hedwig’s.

Save for a few well-timed outbursts, when Hedwig’s not singing, Criss keeps Hedwig’s jealousy, hurt and fury restrained, speaking in a menacing singsong that’s like the voice Robin Williams used to play Mrs. Doubtfire: a lilt ever threatening to drop into acerbic baritone.

As excellent as Criss is in the part, Hall’s Yitzhak, for which she won a 2014 Tony Award, was so mesmerizing at the Wednesday, Oct. 5, opening that you can’t help but want more of her. She gives an effortlessly fluttery, pitch-perfect rendition of Whitney Houston’s version of “I Will Always Love You” (the show’s set in the wake of the 1989 fall of the Berlin Wall); and in her one big solo, “The Long Grift,” she combines orchestra-quality phrasing with the jagged timbre of a rock star. She delivers much of that song in a breathy sotto voce, with which she communicates plenty, so acute is her stage presence, but its one big crescendo suggests untapped potential for rocking out.

Well, not wholly untapped. At four performances during the show’s run, Hall will switch roles and play Hedwig — this production marks the first time in the show’s history that one actor will perform the two parts — with Shannon Conley taking over as Yitzhak.

Whether you see Hall or Criss, both Bay Area natives, in the title role, director Michael Mayer supports his cast with an ecstasy of visual effects. Lighting designer Kevin Adams redefines color palettes. Projections by Benjamin Pearcy achieve the rare feat of not only being worthy of but adding to the live performances.

Illustrating the tender ballad “The Origin of Love,” some of his video appears on the stage’s back wall, some on a scrim in front of Hedwig and the band. Both sets of images interact with the figure of Hedwig, cannily creating a three-dimensional yet unearthly universe in miniature where vengeful gods and hapless humans coexist on a primordial plane.

For all her suffering, Hedwig also is a deity, and that’s what made the musical, which premiered off-Broadway in 1998, so pioneering: It gives a gender-queer character not just flaws, not just agency, but superpowers in the all-American language of rock ’n’ roll. And in this production, those superpowers are wielded by not one, but two superheroes/heroines.